Welcome to the Blog + Review Tour for The Earl’s Lady Geologist by Alissa Baxter, hosted by JustRead Publicity Tours! 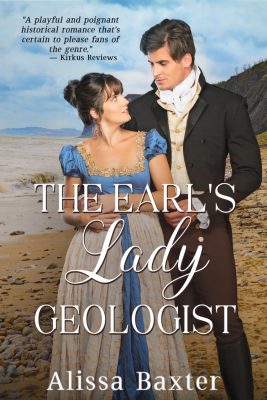 Cassandra Linfield is a lady fossil collector who declares she will never marry as no man will ever take her studies seriously. When circumstances force her to travel to Town for the Season, Cassy infiltrates the hallowed portals of the Geological Society from which she has been banned. She is horrified when she comes face to face with her nemesis, the infuriating Earl of Rothbury.

Lord Rothbury is a gentleman-geologist with a turbulent romantic past. After a youthful disappointment, he vows never to fall in love again and makes the decision, instead, to seek out a convenient wife when he returns to England from his geological travels abroad.

Brought together by their close family ties, Cassy and Rothbury collaborate on a geological paper and discover a powerful attraction. Marriage, however, is the one subject they cannot agree upon. But when Cassy’s life is threatened, the two realize that love matters more than their objections.

A large male figure strode along the foreshore in their direction. Within minutes, he was upon them, and his expression did not bode well. Tall and broad, he wore buff breeches, black boots, and a form-fitting double-breasted riding coat. A slate-grey gaze swung from Cassy to Mary and then back to Cassy again.

“Miss Linfield?” The clipped tone did nothing to relieve the ache in her stomach.

She nodded. How did he know her name? If she’d ever seen this man before, she did not recall the occasion. She doubted it not, as his was a face not easily forgotten. His hair was dark—nearly black—and a slightly piratical cast to his features brought to mind legends of wild men upon the seas. However, the rigidity of his square jaw and his flinty eyes gave the lie to her initial impression that this was a man ruled by his passions.

His gaze swept from her well-worn straw bonnet to the pattens over her visibly muddy boots. His gaze narrowed on her gloved hands. Stained and filthy, they must present a peculiar appearance to this gentleman who somehow knew her name. For he was a gentleman, that she did not doubt—a gentleman in none too pleasant a humour.

She raised her chin. “I am Miss Linfield.”

He removed his hat and bowed. “I…” He paused as his gaze shifted from Cassy to Mary and the spherical-shaped stone beside which she knelt. Frowning, he took a hasty step forward. “Cease your hammering, girl, before you damage that fossil.” He bent down and studied the nodule Mary had split open. “It appears to be a remarkable specimen.”

Cassy clicked her tongue. “Mary is an experienced fossilist and is in no danger of damaging anything.”

He straightened and glanced at Mary, who now stood defiantly before him. “You are Mary Anning?”

“My friend Buckland has spoken of you. My apologies.” His gaze returned to the nodule. “Will you sell me this fossil?”

The man agreed to the price without demur, and the girl’s eyes lit up. “I will take it back to Lyme and clean it for you, sir. Where must I deliver it?”

“I am staying at the Three Cups inn.”

The man’s penetrating gaze returned to Cassy. “Mrs. Linfield requests that you return home directly. I shall escort you.”

She took a step back. “My cousin sent you?”

“Indeed. She is perturbed that you are out here on the beach alone.”

“But I am not alone. I am with Mary, and Miss Elizabeth Philpot is further along the shore.”

“Nevertheless, Mrs. Linfield is in high fidgets, and it would be well to return home directly.”

She took another step back. “With a stranger?”

He bowed. “I have been remiss in introducing myself. Rothbury at your service.”

Cassy swallowed. So this was the legendary Lord Rothbury. Even though they were related by marriage, she had never met Aunt Ella’s eldest son, Edward, the Earl of Rothbury. 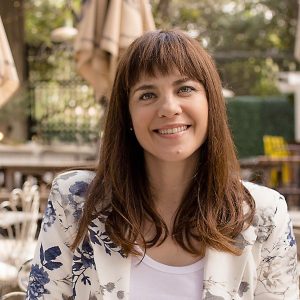 Alissa Baxter wrote her first Regency romance, The Dashing Debutante, during her long university holidays. After traveling the world, she settled down to write her second Regency romance, Lord Fenmore’s Wager, which was inspired by her time living on a country estate in England.

Many years later, Alissa returned to her favorite time period and signed a three-book contract with Vinspire Publishing for her Linfield Ladies Series, a trio of Regency romances that feature women in trend-setting roles who fall in love with men who embrace their trailblazing ways… at least eventually.

Alissa currently lives in Johannesburg with her husband and two sons. She is a member of The Beau Monde – Regency Fiction Writers. 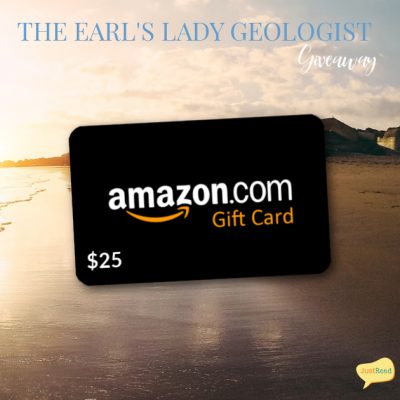 Full tour schedule linked below. Giveaway began at midnight March 2, 2021 and will last through 11:59 PM EST on March 9, 2021. Winner will be notified within 2 weeks of close of the giveaway and given 48 hours to respond or risk forfeiture of prize. US only. Void where prohibited by law or logistics.

Giveaway is subject to the policies found here.