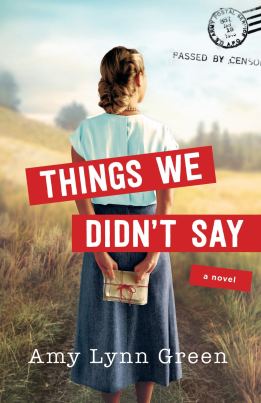 Headstrong Johanna Berglund, a linguistics student at the University of Minnesota, has very definite plans for her future . . . plans that do not include returning to her hometown and the secrets and heartaches she left behind there. But the US Army wants her to work as a translator at a nearby camp for German POWs.

Johanna arrives to find the once-sleepy town exploding with hostility. Most patriotic citizens want nothing to do with German soldiers laboring in their fields, and they’re not afraid to criticize those who work at the camp as well. When Johanna describes the trouble to her friend Peter Ito, a language instructor at a school for military intelligence officers, he encourages her to give the town that rejected her a second chance.

As Johanna interacts with the men of the camp and censors their letters home, she begins to see the prisoners in a more sympathetic light. But advocating for better treatment makes her enemies in the community, especially when charismatic German spokesman Stefan Werner begins to show interest in Johanna and her work. The longer Johanna wages her home-front battle, the more the lines between compassion and treason become blurred–and it’s no longer clear whom she can trust.

I will admit that as intriguing as the premise was for this story, I was a bit skeptical about how much I might like it because of the format it was written in. I’ve struggled with other epistolary pieces (written in the form of letters) in the past. Having said that, I was pleasantly surprised that it was much easier for me this time around. I liked that the from and to were both clearly identified along with some context before each letter and it helped make it easier to know whose head I was in and where they were. There was still a layer of depth missing from the narrative for me that isn’t possible through letters, however at the same point I understand and see why this story had to be told the way it was. The story was able to hold my attention and I wanted to know how things ultimately ended up for Johanna and what led to her circumstances that are revealed in the beginning. Although there were also some parts that dragged (again mostly likely due to the format), overall it was a good story and I’m glad I picked it up to read.

*I received a copy of this book through NetGalley. Thoughts and opinions expressed are mine alone.