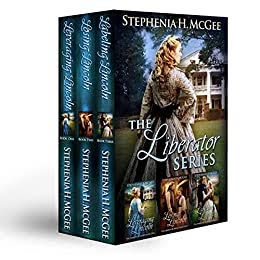 A nation at war.
A plan to change the tides.
A Southern Belle and a Confederate Captain caught in the crossfires as America’s first presidential assassination unfolds….

“All we have to do is kidnap their President….”

Four years of war have reduced the South to near annihilation. Homes lay smoldering and men become desperate. Amid the shadows of fear, a clandestine group waits for an opportunity to change the course of history.

Harlot, liar, spy…
On the threshold of losing her plantation, Annabelle Ross finds a cryptic letter on a dying soldier and seizes the opportunity to get out a message of her own. She never dreamed her plan would brand her a suspected spy… or worse, an unwilling conspirator.

Deserter, traitor, accomplice…
When Matthew Daniels’s brother is taken captive, he finds himself caught up in a plot to gain leverage on the Union. The lines are drawn in blood, and the risk is there for the taking. But will his reckless gamble cost him the woman he had determined not to love?

“The time has come when I must change my plan….”

She thought she’d saved them all, but now a more nefarious plot emerges, increasing the stakes and threatening to bring a nation to its knees.

Displaced, rejected, forsaken…
Annabelle finds herself pulled farther from home and ever closer to the malicious repercussions of war. Elmira prison is filled beyond its capacity, and starving men are left shivering in threadbare clothing beneath paltry shelters. Among the thousands of captured and hopeless Confederates, she searches to find the one man who could be the key to saving her inheritance.

Wounded, desperate, defeated…
Matthew yearns for peace away from Washington. Yet, he can never seem to escape his ties to a frantic madman seeking vengeance. Lurking in the shadows at every turn, the cycle of retribution continually brings yet another danger, and Matthew will do everything in his power to protect the woman he loves – even if it means keeping her from the truth.

In the final dark day days of war, Matthew sets his hopes on Annabelle. She could be the lighthouse that guides him out of the ever encroaching sea of chaos – if only they can allow love and trust to overcome their prideful hearts.

No matter what they called him, Lincoln was dead. Now the suspected conspirators are called to trial and Annabelle and Matthew must face accusations amid misrepresented loyalties.

Beloved, Cherished, Restored…
When Annabelle was unable to stop the nation’s first presidential assassination, her fears of failure were only magnified. Imprisoned and berated, Annabelle wants nothing more than to finally return to Rosswood Plantation. But when a surprise visitor comes to call, his clash with Matthew could destroy her hopes for the future.

Reconciled, Respected, Redeemed…
Forced to choose between his allegiances and the safety of the people he loves, Matthew finds himself swept into the most massive manhunt in history. Booth has disappeared, and everything Matthew holds dear rests on bringing the assassin into custody. He’d promised Annabelle his heart, but the demons haunting the shadows of his mind will no longer be held at bay.

I really enjoyed this whole series. I devoured it in just three days! It was a unique perspective to view the time surrounding President Lincoln’s assassination following the Civil War. I appreciate that the author doesn’t paint things as black and white as far as the “good guys” and “bad guys”, but was able to make the reader see people from both sides of the argument as “human”. She upheld a respect for the sanctity of life while not shying from the harsh reality that war resulted in many casualties. It’s evident that the author has a deep respect for true history and I appreciated seeing that as I read along.

I liked that while this series was about the assassination of Lincoln, it wasn’t the only focus. Annabelle and Matthew were two interesting characters and how they were woven into the true-life plot was intriguing. I liked spending time in their story while also learning more about how the plot to kidnap/assassinate Lincoln truly unfolded. The author also added some truth vs fiction at the end to help understand what truly happened and what was creative license.

I really enjoyed these reads and would easily recommend them to other historical fiction fans. This is a series that flows like one fluid story so I would say it’s imperative that they be read in order.

2 thoughts on “The Liberator Series”