Title: The Rebel Bride (Daughters of the Mayflower #10)

Can Love Form Amidst Tensions of War?
​
During the clash between Union and Confederacy, quiet Tennessean Pearl MacFarlane is compelled to nurse both Rebel and Yankee wounded who seek refuge at her family’s farm. She is determined to remain unmoved by the Yankee cause—until she faces the silent struggle of Union soldier Joshua Wheeler, a recent amputee. The MacFarlane family fits no stereotype Joshua believed in; still he is desperate to regain his footing—as a soldier, as a man, as a Christian—in the aftermath of his debilitating injury. He will use his time behind enemy lines to gather useful intelligence for the Union—if the courageous Rebel woman will stay out of the line of danger.

Join the adventure as the Daughters of the Mayflower series continues with The Rebel Bride by Shannon McNear. 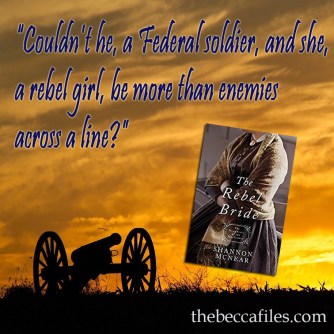 I know that I say it all the time but I just adore this series. For anyone who appreciates family lineage and stretching their knowledge about lesser-known history of our country, this series is amazing. Each of the stories are standalones but the characters are connected through a bond of lineage.

One thing that I love the most about this series is that it slowly takes readers through American history in a way that stretches their knowledge while awakening a deeper appreciation for our nation’s lineage. I cherish the fact that even the authors who have written in the more popular time periods, have searched for events and storylines that are unique in ways that they are still able to stand out from the norm. In her note to the readers, Shannon McNear expresses this very intent. The Civil War is easily one of the most common time periods for historical fiction but her hope was to find a story with a unique yet respective narrative.

When we think of war we tend to think in terms of “good guys” and “bad guys.” For the Civil War we consider “North” and “South” or “Unionists” and “Secessionists,” but do we really consider what it was actually like when it was brother against brother, father against son, etc? I wish I had highlighted the quote, but there was a part in the novel where it was said that both sides used the same Bible and had the same God. It was sad that it had to come to war in the first place. But what’s unique is seeing multiple people from opposite sides of the battle still able to connect and develop friendships with one another through their circumstances despite the war raging on around them.

I really appreciated how the relationship between Pearl and Josh developed. At first the animosity that existed was tangible, but as she was convicted to “love her enemies,” her feelings slowly changed. The more she was able to see Josh as another person instead of simply the enemy, the more she was able to see that there was more to him than his political opinions. It’s amazing what happens when we actively choose to love others despite our differences.

Again, I don’t think I can recommend this series enough. I have adored each and every one of them and can’t wait to continue with the next one. If you haven’t read any of them yet you need to change that!

*I received a copy of this book through NetGalley. Thoughts and opinions expressed are mine alone.

4 thoughts on “The Rebel Bride (Daughters of the Mayflower #10)”