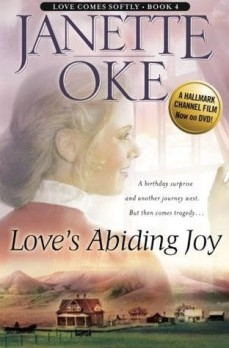 I happened to have been talking with a friend about favorite books and series this past weekend and The Love Comes Softly series was one of the ones that was brought up. I admit that I’m one of those complainers about the movies from this series because they veer so far from the original storyline of the books. Without sharing any spoilers, this book (#4 in the series), was the one that I believe disappointed me the most. The book itself was the most memorable for me behind Love Comes Softly (#1). So while the movies may frustrate me, the books themselves are one of my favorite series of all time. HIGHLY recommend them if you haven’t already!

A Birthday Surprise, a New Journey West, and a Delightful Reunion! But Then Comes Tragedy.

Marty and Clark Davis’s daughter Missie and her husband had homesteaded land in the far West, many weeks’ journey away by covered wagon. But with the coming of the frontier railroad, the miles are suddenly bridged, making possible their long-awaited reunion.

Grandparents Marty and Clark are thrilled to meet their two little grandsons for the first time. Missie, anxious to hear news from home, plies her mother with questions about her brothers and sisters. And as Willie proudly shows the two visitors around his successful ranch, Missie, just as proudly, shows them the little soddy that was their original home.
But the joyful reunion is shattered by a tragic accident. Will they ever be a happy family again?

Janette Oke writes with a profound simplicity of what she knows best—real life, honest love, and lasting values. With over 23 million in sales, her historical novels portray the lives of early North American settlers from many walks of life and geographical settings. She also writes engaging children’s stories and inspiring gift books that warm the heart.

Janette was born during the depression years to a Canadian prairie farmer and his wife, and she remembers her childhood as full of love and laughter and family love. After graduating from Mountain View Bible College in Canada where she met her husband, Edward, they pastored churches in Canada and the U.S., and they raised their family of four children, including twin boys, in both countries. Edward eventually became president of Mountain View Bible College and recently established a coalition of colleges that became Rocky Mountain Bible College.

During her earliest years, Janette sensed the desire to write. Though she yearned to be a published novelist, she devoted herself to being a wife and mother because, she says, “there is no higher honor—that is my number-one priority.” She began serious writing when her children were entering their teens.

Her first novel, a prairie love story titled Love Comes Softly, was published by Bethany House in 1979. This book was followed by more than 75 others. She reaches both religious and general markets, telling stories that transcend time and place. Her readers of all ages and walks of life can identify with the everyday events and emotions of her characters. Janette believes everyone goes through tough times—the key is to be prepared with a strong faith as the foundation from which decisions are made and difficult experiences are faced. That perspective is subtly woven throughout her novels.

After Love Comes Softly was published, Oke found her readers asking for more. That book led to a series of eight others in her Love Comes Softly series. She has written multiple fiction series, including The Canadian West, Seasons of the Heart and Women of the West. Her most recent releases include a beautiful children’s picture book, I Wonder…Did Jesus Have a Pet Lamb and The Song of Acadia series, co-written with T. Davis Bunn.

Janette Oke’s warm writing style has won the hearts of millions of readers. She has received numerous awards, including the Gold Medallion Award, The Christy Award of Excellence, the 1992 President’s Award for her significant contribution to the category of Christian fiction from the Evangelical Christian Publishers Association, and in 1999 the Life Impact Award from the Christian Booksellers Association International. Beloved worldwide, her books have been translated into fourteen languages.

In recent years, Janette and her siblings lovingly restored their parents’ prairie farm home, and it now serves as a gift shop and museum of prairie life. Please see below for a special invitation to the Oke Writing Museum and The Steeves’ Historical House. She and her husband live nearby in Alberta, Canada, where they are active in their local church. Visits from their families, including their grandchildren, are their delight.