Welcome to the Blog Tour for The Rescue by Tanya Eavenson, hosted by JustRead Publicity Tours! 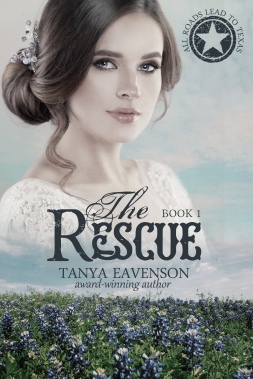 Sometimes the path to freedom is found in an unexpected future.

Upon the death of her mother, Rosalind Standford’s life shatters, the pieces scattering to the wind when she is forced into a betrothal to a cunning banker. But when a telegram arrives announcing the man who captured her heart is on a train to Boston, Rosalind must hide her true feelings before the thin cord of her existence unravels the deadly secrets she keeps.

Cowboy Trent Easton returns to his roots in Boston society to find his childhood friend, the love of his heart. Instead he finds a broken woman engaged to a man close to her father’s age. Though she once rejected him, when Trent learns she’s in danger, he determines to do whatever it takes to keep her safe—even taking her to the altar in the black of night. But will his name and the remote wilds of his Texas ranch be enough to protect her? Or will freedom cost them their lives?

Tanya Eavenson is an international bestselling and award-winning inspirational romance author. She enjoys spending time with her husband and their three children. Her favorite pastime is grabbing a cup of coffee, eating chocolate, and reading a good book. You can find her at her website http://www.tanyaeavenson.com/.

Securing the wire, Trent reached for the bandana in his pocket, then wiped the back of his neck. He shielded his eyes as Matthew came to an abrupt halt.

“Your father sent me. You’re needed at the house.”

“Is everything all right?”

Trent ran for his horse and leapt into the saddle. He goaded the animal to a full gallop and strained forward as if doing so would quicken his arrival. Mother seldom cried. Was she hurt? Had something happened to one of the cowhands? Dear God, give me strength to face whatever’s come our way.

He jumped from the saddle before his horse came to a stop, rushed up onto the porch, and blasted through the front door. “Father?”

“Why is Mother crying?”

“She received a letter from Boston. You remember the Standfords?”

He nodded. Of course he remembered them. One in particular.

Trent’s legs wobbled. He steadied himself against the back of a chair, his rough callouses pressing against the wood as fear clawed its way up his throat. “Rosalind?”

His father’s brows furrowed. “No. Her mother … Sarah. Apparently, she was buried almost a year ago. I’m not sure why the letter took so long getting here, maybe it got lost, but I received word in the mail today from Mr. Standford. Your mother knew Sarah was ill, but not like this. She died of consumption.”

Mrs. Standford dead these last twelve months—she’d been a second mother to him during his childhood—and not one letter, not one word from Rosalind. Not for over a year now. He’d proposed marriage, and then, silence. Had she stopped writing because of her mother’s passing? Or had she found someone else? “How is everyone?” He cleared his throat. “How’s Rosalind?”

“I’m not sure. Roger didn’t say, but your mother has expressed a desire to return to Boston and see how Rosalind is managing. You know Rosalind’s sister was married and had her own life even before we left. Your mother is set on visiting, so I’ll accompany her. Would you care to join us? We’d like for you to, but the choice is yours. I believe Matthew can handle the ranch while we’re gone.”

Hadn’t Trent just told himself he never wanted to go back? The last time he’d seen Rosalind, she’d looked so lovely in the moonlight. He’d taken her hand before she’d turned to leave, and the warmth had left him tingling long after she’d gone. The smell of roses would always remind him of her.

He clasped his hands on the back of the chair. His sandpaper callouses weren’t the only reasons he no longer belonged in Boston, but they were evidence enough of the unmistakable changes inside him. Never again would he fit in, mingling with high society and attending endless parties. He belonged with the bluebonnets and longhorns on his ranch, where working hard and getting his hands dirty brought a satisfaction he’d never dreamed of while growing up in the city.

Trent wasn’t the only one in the family who’d changed. Back in Boston, his father had owned one of the largest banks in the city, a position which commanded respect but also left little time for family. Although the move to Graham had fulfilled his father’s dream of being a rancher, Trent had also found his place in this world. And he’d gained a father.

He met his father’s gaze. “If I join you, I’ll need to be back in time to drive the herd to market.”

(1) winner will receive a Woman of Faith bracelet & ebook copy of The Rescue.

Be sure to check out each stop on these tours for more chances to win. Full tour schedule on this tour shown below. Giveaway begins at midnight September 10, 2019 and will last through 11:59 PM EST on September 17, 2019. Winners will be notified within 2 weeks of close of the giveaway and given 48 hours to respond or risk forfeiture of prize. Due to shipping cost, only US mailing addresses valid. For our giveaway rules and policy, click HERE.