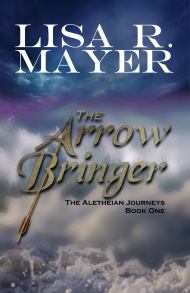 Evie could’ve saved Aletheia. Now it might be too late.

Evie Lewis has just been diagnosed with leukemia at sixteen. Then, a powerful being called the Arrow Bringer offers her a choice: spend her last days in peace or save Aletheia. She stays. But then Shawn Lawrence—the closest person she has to a friend—goes in her place. Now Evie must save Shawn and race to fix her mistake as a shadow falls over Aletheia. Even as leukemia consumes her body, a new enemy and more imminent perils pursue her. And she must endure all and save Aletheia while keeping her darkest secret:

that it’s all her fault.

Lisa Mayer recognizes, far better than most, the power of words. She also understands that what people need to know about Jesus is that His love is unconditional, His mercy is unending… and that there are no lengths to how far He’ll go to save His people.

Jesus melted Lisa’s hard heart through words. Now, she hopes to use her words to do the same for others. She loves Jesus and His people and you won’t find a judgmental bone in her body. She lives in Indiana with her husband, Rich, and her furbaby, Scooby. She loves writing, and in her free time, you’ll find her curled up in her superhero pajamas binge-watching her favorite movies and TV shows.

Generally speaking I’m not a fan of fantasy however when it’s allegorical I tend to enjoy it. For the most part this was an interesting story and conveyed a powerful message but I struggled with the level and detail of the violence scattered throughout. I can see how this book would appeal to the YA crowd though, and would consider this an alternative for Hunger Games fans looking for something in the Christian genre.

I think one of the important themes to take away from this story is the concept of the lie that “I’ve messed up too bad for forgiveness.” These feelings are expressed by several characters in the story. They think they cannot be forgiven and so they deserve whatever situations they’ve landed in, believing them to be permanent. How the idea of this was overcome was very powerful, but you’ll have to read to find out how.

The book did share some important messages throughout and this could be a good book to share with an unsaved friend to get them thinking about Jesus. Like I said, I think this book will appeal to the YA crowd and I think fans of fantasy will enjoy it as well. I would have liked it more personally  if there was less detail in the violence, but the story itself was well written and certainly holds your attention as a reader.

The inspiration to write a book often starts with a dream. Mine started with a lamp post.

I had no idea that after watching The Chronicles of Narnia: The Lion, the Witch, and the Wardrobe in December 2005 my life would never be the same. From that moment, I read every Narnia and C.S. Lewis book I could get my hands on. I searched for Narnia in every wardrobe and ended up finding it deep within my heart… and that’s when I knew I wanted to write a modern Christian-fantasy series inspired by Narnia. And the first book of The Aletheian Journeys came to life—The Arrow Bringer.

I’d like to say that my first draft was pure magic. But my journey was only beginning, and I had a lot to learn. Writing is an art and requires the patience of a sculptor. I began with a large block of marble and a vision, and then sculpted away until I discovered the beauty underneath.

Don’t get me wrong. I want The Arrow Bringer (and the six following novels in The Aletheian Journeys) to make it—make an impact, make a difference, make straight His paths. C.S. Lewis changed the world with Narnia. Anyone who reads it knows what it is to love Aslan better here by knowing him first in Narnia. And yet all of us still hunger for something that we can’t explain—and that is Jesus Christ.

At its heart, The Arrow Bringer is a love story. The story of the love of the Arrow Bringer for this people, for friends and family struggling to save Aletheia, and a story of love between us and Jesus. The story is meant to inspire, to bring hope, and to remind you of how much you matter. I sincerely hope, with all my heart, that you will find the Arrow Bringer not only in Aletheia… but in every chapter of your life.

It wasn’t just my writing journey that began with a lamp post… but my journey with Christ. By coming further up and further in, I found more than I ever could have dreamed. I hope the spark from that lamp post will fuel The Arrow Bringer, honoring the legacy of C.S. Lewis, and inspiring a new generation. Within The Arrow Bringer, I hope you’ll find joy, romance, friendship, and adventure. Most of all, I hope you discover that Jesus’ mercy has no end… and He loves you far more than you could ever imagine.

Through the Fire Blogs, March 29

To celebrate her tour, Lisa is giving away a grand prize of a Narnia gift basket that includes a signed copy of The Aletheian Journeys: The Arrow Bringer, the entire The Chronicles of Narnia series by C.S. Lewis, The Lion, The Witch, and The Wardrobe on Blu-ray and a movie companion booklet, and two of Lisa R Mayer’s favorite Narnia reflection books in pristine condition from her personal collection: The Heart of the Chronicles of Narnia: Knowing God Here By Finding Him There by Thomas Williams and Believing in Narnia: A Kid’s Guide to Unlocking Secret Symbols of Faith in C.S. Lewis’s The Chronicles of Narnia by Natalie Gillespie!!