The Book I’m featuring this week is:

“And this, children, is a drawing of the Great Pyramid of Giza in Egypt.”

Y’all, I don’t even have the words right now, but I just finished this book about an hour ago and absolutely HIGHLY recommend it. I won’t be sharing my full review until later in January as part of a review tour, but it releases in a few days on Jan 8. Go get yourself a copy if you haven’t already pre-ordered! Tamera Alexander has made history come alive in a powerful way, sure to spark the empathy of every reader who picks it up.

On the night of November 30, 1864, a brutal battle in Franklin, Tennessee, all but decimates the Confederacy and nearly kills Captain Roland Ward Jones. A decorated Mississippi sharpshooter, Jones has a vision on the battlefield and, despite the severity of his wounds, believes his life will be spared. But a life without his leg, he can’t abide. He compels Elizabeth “Lizzie” Clouston—governess to the McGavock family at the Carnton mansion—to intervene should the surgeon decide to amputate. True to her word, Lizzie speaks on his behalf and saves not only the captain’s leg but also his life.

When a fourteen-year-old soldier dies in Lizzie’s arms that night, the boy’s final words, whispered with urgency, demand that Lizzie deliver them to their intended recipient. But all she has is the boy’s first name. And, as she soon discovers, there’s no record of him ever having enlisted. How can she set out alone across a land so divided by war and hatred to honor her pledge? Even more, does she dare accept Captain Jones’s offer to accompany her? As he coalesces at Carnton, romance has blossomed between him and Lizzie—a woman already betrothed to a man she does not love.

From the pages of history and the personal accounts of those who endured the Battle of Franklin, Tamera Alexander weaves the real-life love letters between Captain Roland Ward Jones and Elizabeth Clouston into a story of unlikely romance first kindled amid the shadows of war. 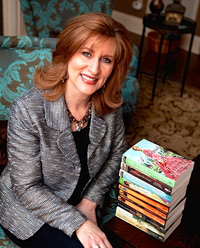 Tamera Alexander is the USA Today bestselling author of numerous books, including A Lasting Impression, A Note Yet Unsung, To Whisper Her Name, and To Wager Her Heart.

Her richly drawn characters and thought-provoking plots have earned her devoted readers worldwide, as well as multiple industry awards.

These awards include the Christy Award for Excellence in Christian fiction, the RITA Award for Best Inspirational Romance, the Gayle Wilson Award of Excellence, Bookseller’s Best Award, and being listed among Publishers Weekly and Library Journal’s Top Inspirational Fiction, among others.

Tamera’s books have been translated into numerous languages. She’s toured Germany and The Netherlands meeting readers, and cherishes those connections.

She hopes readers who pick up one of her novels will be swept away into another time and place, that they’ll fall in love with the characters and gain insights into the history of the setting and people of yesteryear. But most of all, when a reader turns that final page in one of her novels, she prays they will have taken a step closer to Christ. Because He’s what it’s all about.

After living in Colorado for nearly two decades, Tamera and her husband now make their home in Nashville where they enjoy life with their two adult children who live nearby, and Murphy—a rambunctious but oh-so-lovable Australian Terrier.