I’ve actually read all three books in this series. I could be wrong but I think it might have been my first series that I read by Sharlene MacLaren. It certainly made me fall in love with her writing though! This is one I would highly recommend to historical fiction fans especially those who love new schoolteacher stories.

When Liza Jane Merriwether rode into the town of Little Hickman Creek, her first thought was, Oh, Lord, what have I done? Soon, the new schoolteacher is beloved by all, including a handsome widower with two young children. But her contract implicitly states that she is to have no improper contact with the opposite sex. Liza has a lot to learn about God and His plan for her life. 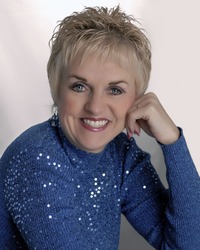 After 31 years of teaching second and fourth grades, Shar decided to say, “Bye-bye, Students!” and “Hello, Writing World!” and it’s been an interesting, exciting, challenging, and inspiring adventure. One thing she knows for certain—God dropped a seed of passion for writing in her heart back in the summer of 2000, and He’s been growing it ever since. She signed on with Whitaker House Publishers in early 2006 and in December of that same year released Through Every Storm, a general fiction title that finaled in the American Christian Fiction Writers Book-of-the-Year. Another general fiction title, Long Journey Home, hit shelves in 2008. (It is her pleasure to announce that both of these titles are also available in SPANISH.)

Sharlene’s beloved, bestselling “Little Hickman Creek Series” released in 2007-08. This 3-book series set in 1895 KENTUCKY won the “Road to Romance” Reviewers’ Choice Award and a third place standing in the Inspirational Readers’ Choice Contest in 2008 and 2009. Also, in 2009, her historical series, “The Daughters of Jacob Kane”, began hitting bookshelves in stores countrywide. In late summer of 2010, Tender Vow, another general fiction stand-alone, will release, and following that, a 1920s 3-book set called “River of Hope”. The first in that series, River Song, should become available in the spring of 2011. Yep, you guessed it – Shar is BUSY!!!

Shar has done numerous book-signings across the country, appeared on many national television and radio shows, and participated in countless interviews. She has been married to the love of her life since December of 1975, has two wonderful daughters and two handsome sons-in-law. The joys of her life, however, are her adorable grandchildren. Besides her involvement in music at her local church, Shar has been a speaker for the local MOPS organization, is involved in KIDS’ HOPE, USA, a mentoring program for at-risk children, counsels young women in the international APPLES OF GOLD program, and attends two bi-weekly Bible studies. She and her darling husband, Cecil, live in Spring Lake, Michigan with Peyton, their loveable collie, and Mocha, their big, lazy cat.