About the Book:
In 1943 Germany, Helene is just about to wake up her children to go to school when a group of policemen break into her house. The policemen want to haul away her gypsy husband and their five children. The police tell Helene that as a German she does not have to go with them, but she decides to share the fate of her family. After convincing her children that they are going off to a vacation place, so as to calm them, the entire family is deported to Auschwitz.

For being German, they are settled in the first barracks of the Gypsy Camp. The living conditions are extremely harsh, but at least she is with her five children. A few days after their arrival, Doctor Mengele comes to pay her a visit, having noticed on her entry card that she is a nurse. He proposes that she direct the camp’s nursery. The facilities would be set up in Barrack 29 and Barrack 31, one of which would be the nursery for newborn infants and the other for children over six years old.

Helene, with the help of two Polish Jewish prisoners and four gypsy mothers, organizes the buildings. Though Mengele provides them with swings, Disney movies, school supplies, and food, the people are living in crowded conditions under extreme conditions. And less than 400 yards away, two gas chambers are exterminating thousands of people daily.

For sixteen months, Helene lives with this reality, desperately trying to find a way to save her children. Auschwitz Lullaby is a story of perseverance, of hope, and of strength in one of the most horrific times in history.

My Review:
I saw the upcoming release of this book announced on Twitter a few months back and I’ve been anxiously waiting for my chance to read it since then. This is not your “fluffy bunny” kind of story, but rather a raw, emotional, heartfelt journey of a family trying to survive in the impossible environment of Auschwitz. There’s no way that you can read through the pages without your emotions being wrecked. What’s more, this book is based on a true story. The author shares at the end that he did the best he could to stick to the actual story. He even kept most of the names the same (including Helene herself).

Considered an Aryan herself, Helene could have stayed home while the soldiers tore her family away (her husband was a gypsy and therefore their children were labelled as such). More than once the soldiers told Helene that she didn’t need to come.  She responded by saying “do you think a mother would leave her children in a situation like this?” The response she was given was “you’d be shocked if I told you all I’ve seen in the past few years.” We’ve all heard that war can make people do crazy things they never thought possible, but this exchange really broke my heart. We all hope that in the same situation we would go with our families and comfort them, but when faced with a life-or-death choice would love or selfishness be our first response? Even after tasting what life was like in Auschwitz, Helene continued to refuse help for herself so that her children would not be alone (her husband had been separated from the family). Helene is a true model of love.

Another character that really stood out to me is Blaz, Helene’s oldest son. Not even a teenager yet, Blaz showed the character of a man far beyond his years. Instead of thinking of himself first, he looked to others and their needs. In the very beginning of the book when the family is on the train to Auschwitz, they are given a small bucket of water for everyone in the train car to get a sip. It had already been a few days, and everyone was desperate for hydration. Instead of taking whatever he could from the bucket, Blaz declined his share so that others could have more. If that doesn’t make you think of your own selfishness, I don’t know what will. If I had gone days without water, would I be able to give up my drink to others as well? Especially when going into a world of unknown? The Christ-like character that Blaz had developed is remarkable. I could only hope I’d be like him in the circumstances.

A common theme throughout the story is Helene’s search for “humanity” in everyone around her. Although initially oblivious to what Dr Mengele was actually doing to his patients, Helene was constantly observing him, hoping to find a shred of humanity left in him. She did the same with the guards and anyone else with position in the camp. The war turned many people into monsters, and she was hoping they’d change. This attitude really caught me. Even in the face of pure evil, she was seeking good and hoping that it could be restored. She was aware that war changed people, but she clung to hope.

After finishing this story, I’m left with many thoughts to ponder. How would I react to the same circumstances? How were they ever able to get that far in the first place? Would I be able to be selfless even when facing death? This story is certainly emotional, but I highly recommend the read. This was my first time reading anything by Mario Escobar, but I hope it’s not my last. Most of his books are in Spanish, and while I do know some, I’m not confident in my ability to read a full novel. So I guess I’ll just have to wait for some English translations. Looking at some of the titles, I hope they get translated soon!

* I received a complimentary copy of this book from Thomas Nelson through NetGalley. Opinions expressed in this review are completely my own. 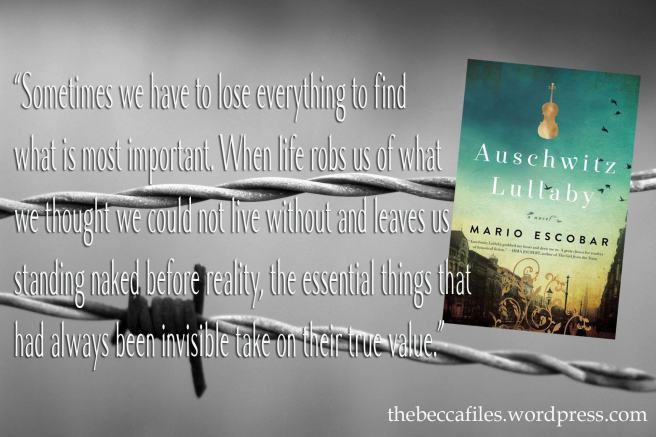 Age Appropriateness/Content Warnings:
There’s really no way of reading a book set during the Holocaust that won’t have some level of intense content. This book is based on a true story, and definitely contains content that could be difficult for some readers. The thing with history though, is it’ often ugly. While there are a few intense scenes, I would consider this more of an emotional read than a graphic one.