About the Book:
Cora Rey wanted a fresh start in life, but being thrown back in time to 1850 isn’t how she expected to do that. She discovers that Victorian England isn’t the pleasant social whirl Jane Austen led her to believe, but when in Rome—or in this case Twickenham . . . She’s determined to have the vacation of a lifetime, especially in the company of a certain duke.

Simon Tuttle never expected to become the duke of Hertfordshire, never wanted it, but now he is, and eligible women seeking a title consider him the next trophy to be taken in the marriage mart. A union of convenience is the most he hopes for due to the shame-filled secret he bears—until he meets Cora. Now, he imagines that a love match could be possible after all. Hiding his secret from society has been easy—hiding it from Cora proves impossible. Can Cora love a man like him despite learning the truth?

This delightful romance is a little Regency, a little contemporary, and a lot Victorian. 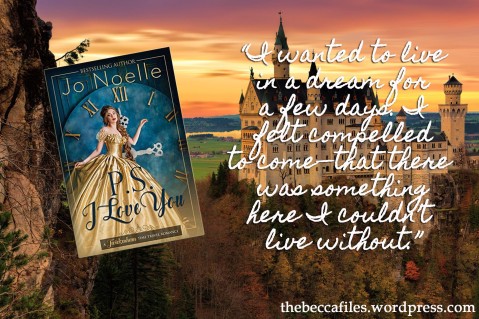 Oh boy, can I just say that if it were ever able for a book to be possible, that I’d jump right into this one?? Imagine going on a vacation to England, expecting a week of living like the past, only to find yourself actually being sent back to 1850! Are you feeling a little jealous too?

Without giving anything away, the book describes time as a “fuzzball.” I’m merely sharing the term due to my own amusement from it. The story does explain the reasoning, but it also leaves some of it up to imagination. There is also a bit of “faerie magic” involved. I’m personally not a fan of “faerie fantasies,” but the emphasis was small enough it didn’t bother me.

I thought it was sweet how even though Simon and Cora were separated by over 100 years, there were still things they were able to have in common. Disabilities were treated far different in the past than they are now. The heart that both characters had for those with special needs (specifically deafness), was uplifting. Cora experienced it through her own mother when she was a child, and Simon has secretly suffered with losing most of his hearing due to childhood illness. It’s something that helps them to form their own unique bond.

There were are few references to “Jane Austen” and the characters from her books, so I’d be willing to bet the author is a fan. It shows in the character development, of which I’m not complaining. Life in 1850 was quite different from today, so the culture clash was a pretty big deal for Cora going in (even being someone who loved history), but she was able to make new friends to show her around and educate her on the customs. I think it could have been awkward, but the author was able to add a bit of humor so that it wasn’t. Her lack of knowledge was blamed on her being “American.”

If you wish you could step back into a Jane Austen novel, or at least historical England, then I would highly recommend this story. It’s an enjoyable clean read, and surely one to bring out your inner-idealist. This one is being added to my favorites! Loved it!

*I received a complimentary copy from iamareader.com and the author in hopes of an honest review. I was not obligated to give a positive review. Thoughts and opinions expressed are mine alone.

Age Appropriateness: Overall this is a clean read. There are a few scenes that involve gambling, and a bit of light romance, but nothing explicit. Since most of the books I review on here are Christian, I feel the need to note that this one isn’t, but thankfully the content isn’t questionable. It’s written for adults but it could be enjoyed by younger readers. My personal recommendation is 13 and up.

3 thoughts on “P.S. I Love You (A Twickenham Time Travel Romance)”